Interactivity Inspiring the Minds of the Next Generation

We were appointed the technical partner to Eureka! The National Children’s Museum in Halifax for the most recent installations in their Spark Gallery. The interactive projects are the result of a collaboration between Universal Live, Eureka! and Lumen Art Projects and have been nine months in the planning.

Delivering and maintaining full technical support to the exhibition we provided, computers, twelve large screens, developed the interactive sensors as well as the provision of twenty high-end projectors used in a variety of clever ways, including the use of super-short throw lenses, which allow visitors to get up-close to the action without casting their shadow (within reason of course).

The short-throw projection is also provided by us in Arboreal, the interactive, animated environment created by US Artists Moses Journey and David Glicksman and, in ShapeShift, original artworks by Think Create LLC (Deqing Sun & Peiqi Su) and Interval Studio, both from the USA.

The installations in the Spark Gallery span two floors of the museum and launched following a private VIP viewing in December, attended by artists and event organisers alike seeking inspiration for their next projects. The full exhibition is now open to the public and will run until September 2020, with regular evening events for the more grown-up children!

The ground floor Spark Gallery, and is a fun, animated, colourful projection of a nocturnal forest alive with playful creatures with which you engage and interact; fireflies find, swirl and land on you, glow-worms follow your steps, frogs play memory games with you, stomp-pads on the floor allow you to feed the monsters (if you’re quick enough!) or play pinball in the trees, plus you can create your own music loops in the Crystal Cave. 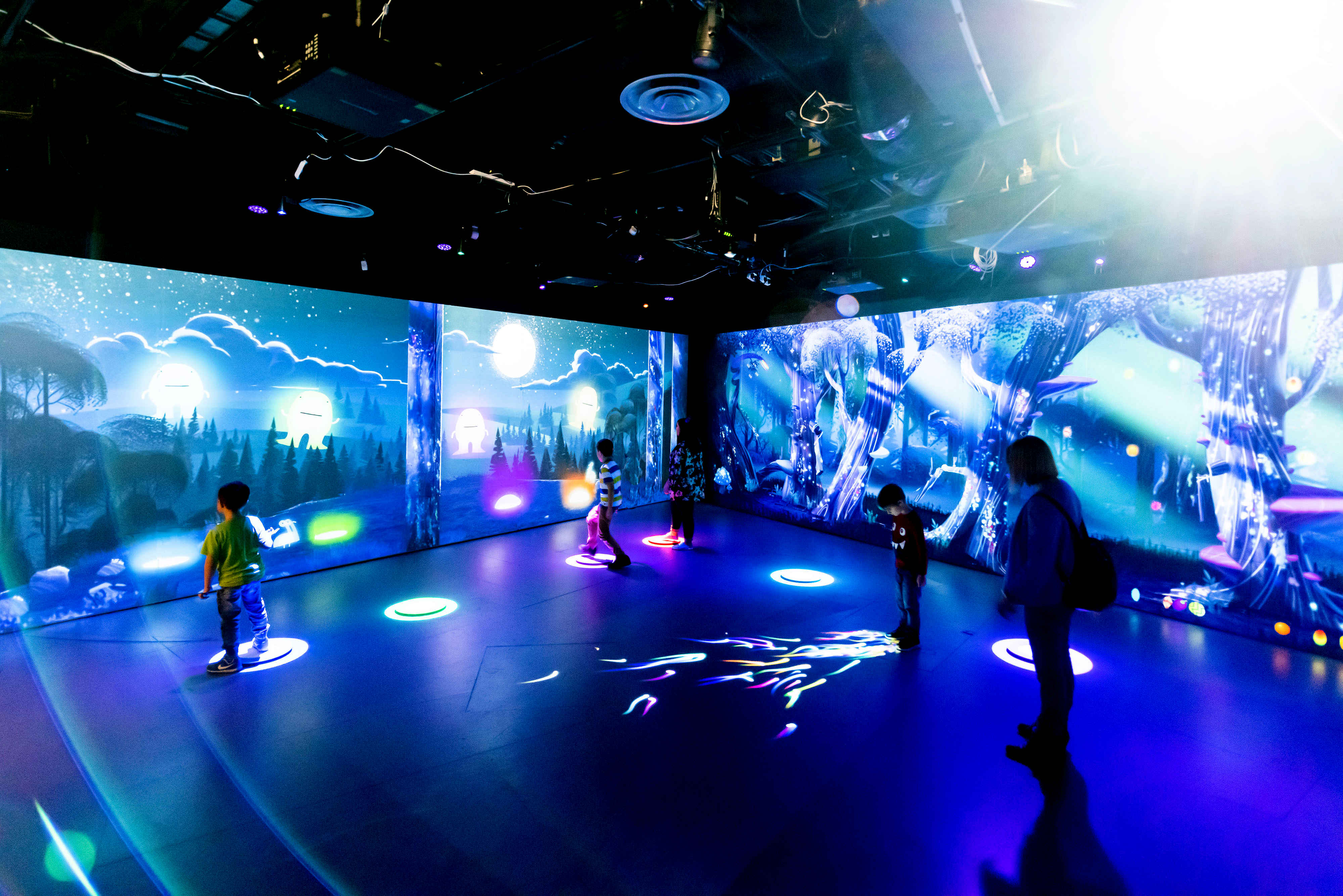 This installation occupies the first floor Spark Gallery. Here, the technology reacts to how the visitors move through the space, and, once again, every element within the room is interactive, from converting digital to analogue with ‘FlipDot’ screens to using your fingertips to create music, sounds and imagery with ‘Variant:’ or interacting with a floor-to-ceiling projection to create your own ‘Butterfly Effect’. 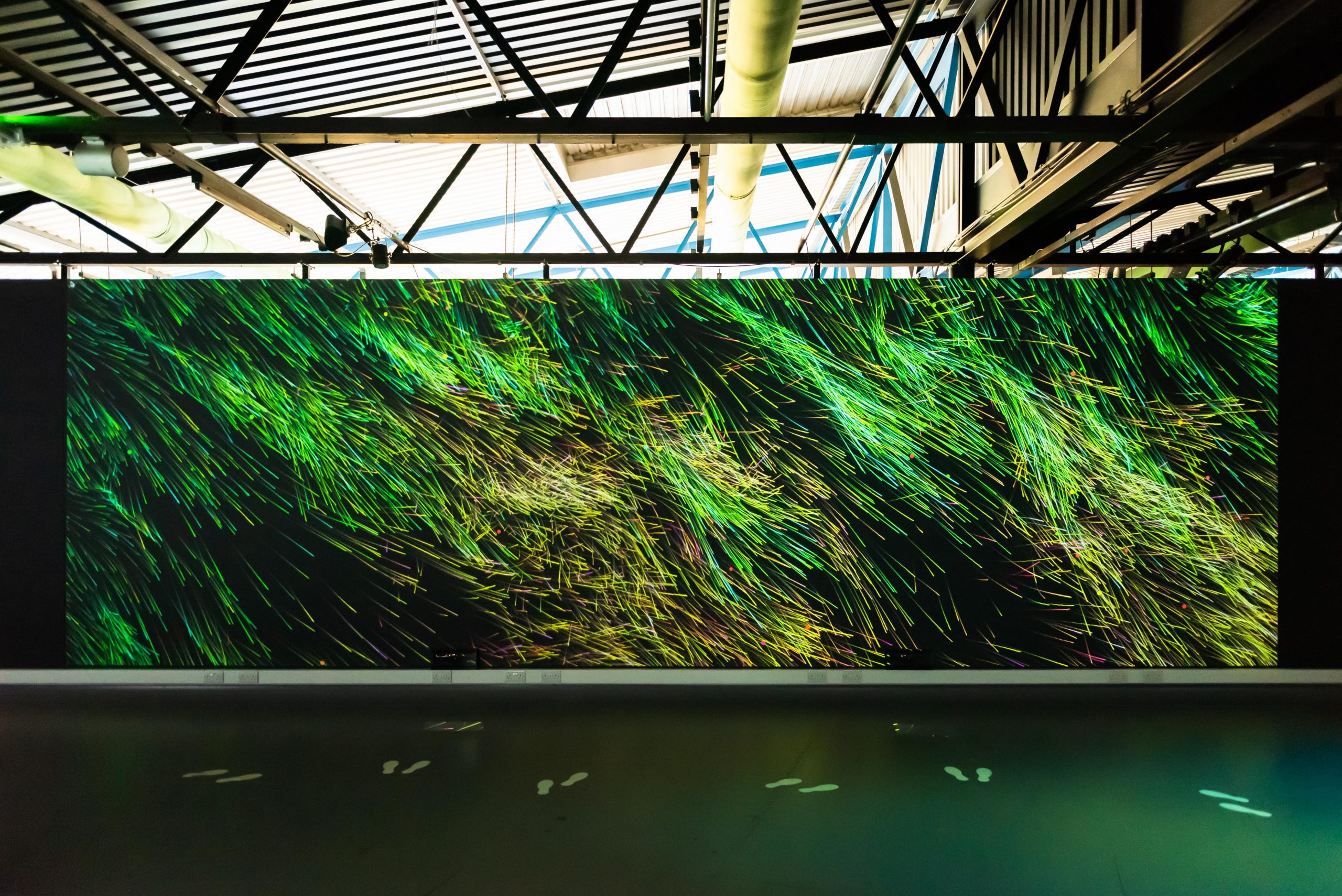 “Our Spark gallery continues to go from strength to strength. We’re indebted to Universal Live for their support in delivering an innovative and high-tech experience for our visitors.”

About The Lumen Prize – https://lumenprize.com

The Lumen Prize celebrates the very best art created with technology. Founded in 2012, the annual juried competition has since awarded more than $80,000 in prize money and draws entries from artists globally. Run by Lumen Art Projects, a not-for-profit organisation based in the UK, it has staged more than 45 exhibitions worldwide in cities including Athens, Amsterdam, London, New York and Shanghai. The team have 20 years of experience working with artists from around the world, creating high impact and diverse exhibitions. International from its start, Lumen has attracted artists from as far afield as Israel, Iran, South Africa and across Asia, with past winners from Brazil, Sweden and Ecuador. The Lumen Prize works in two broad areas: Raising awareness about appreciation of art created with technology and creating opportunities for artists that make it. It works to provide digital artists with greater opportunities such as exhibitions or networking events, to allow connections to happen with groups that might not otherwise have met.

Based in Halifax, next to the main railway station, Eureka! is the UK’s only national children’s museum. Since it opened in 1992, Eureka! has brought smiles to the faces of more than 7.5m visitors. During that time, it has attracted £22 million of capital investment, employed more than 2500 people, won 60 local, national and international awards and changed the face of the sector by spearheading a more immersive and interactive approach to traditional museums throughout Britain. The 4500sqm building features 400 hands-on experiences over six main galleries, including the newest space, Spark gallery. In 2017, Eureka boasted its highest visitor numbers in 20 years with 303,545 people coming through the doors, up 15,000 on the previous year. In 2017, Eureka! announced an £11m project in the Wirral to create a second attraction, located on the site adjacent to Seacombe Ferry Terminal, as well as a forthcoming expansion of its Halifax site. Eureka! is a charity that is entirely dependent on earned revenue to sustain operations and ensure families from all backgrounds can benefit from the play and learning opportunities it offers.